Context switching, where you try to juggle multiple tasks at once, can lower productivity by as much as 80%. 80%!

If left unchecked, context switching only destroys your productive time, it can also overload your brain (makes you dumber as I’ll show below) and stresses you out.

In this article, I’m going to show you the research on context switching and then show you exactly how to fight it.

What is Context Switching?

It’s an attempt at multitasking where you erratically jump from one thing to the next in a mad dash to feel more productive.

Right now, I’m writing this guide on context switching and I’m focused 100% on it.

But then I get an email alert and check that.

I read and respond to the email and jump back to writing this guide.

Then, I get a Slack notification and follow up on that.

Afterward, I again go back to writing this guide.

Then, I feel the urge to check my Facebook. (Someone is breaking up and I need to check on it.)

After a few minutes there, I return once again to writing this guide.

In other words, I’m jumping back-and-forth from task to task, getting stuck in a constant stream of distractions.

This makes it incredibly hard to focus, resulting in a context switching penalty, which is the additional cognitive load my brain needs to process when moving from one task to another.

In turn, this inevitably takes a toll on my productivity.

While it may seem like productivity is increasing by taking on multiple tasks at once, this isn’t actually the case.

In reality, this approach usually hurts productivity, which leads me to my next point.

Why Context Switching is Detrimental

Historically, multitasking has been viewed as a positive thing because it makes people feel like they’re being more productive.

However, it only leads to distractions that leave you perpetually sidetracked.

And there’s a solid body of scientific evidence that shows the negative impact that context switching can have.

According to Stanford University professor Clifford Nass, “‘Heavy multitaskers’ have trouble tuning out distractions and switching tasks compared with those who multitask less. And there’s evidence that multitasking may weaken cognitive ability.”

The American Psychological Association agrees, saying that the human brain isn’t designed for heavy multitasking, and trying to perform more than one task at a time can lead to reduced productivity and mental overload.

Psychologists use air-traffic control as a metaphor.

The brain engaging is context switching is like having an air-traffic controller trying to choreograph multiple airplane departures and landings at the same time.

It’s impossible to do, and the mental overload can have disastrous consequences.

And when it comes to day-to-day work activities, the negative impact of context switching is undeniable, mainly in the productivity loss that occurs.

Let’s look at some quantitative data to see just how much productivity suffers because of context switching.

Computer scientist and psychologist Gerald Weinberg performed a study to determine how much productivity is lost by juggling multiple tasks at the same time.

If you only focus on a single task, you’re able to devote 100% of your productive time, and nothing is lost due to context switching.

And it only gets worse with the more tasks you’re working on. 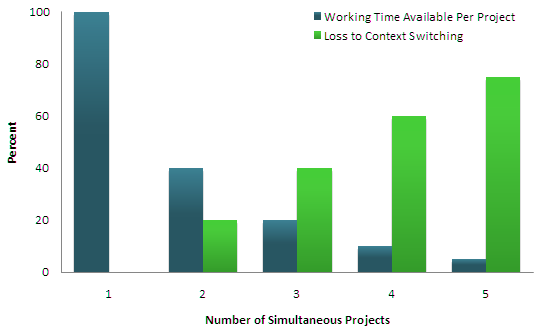 Here’s an illustration of how your working time decreases as you perform more tasks and how your loss to context switching increases.

As you can see, even trying to perform two tasks at the same time dramatically hurts your productivity.

But the more tasks you add, the lower your productivity plummets.

And whenever there’s a drop in productivity, it inevitably leads to lower profitability.

One global study found that companies collectively lose as much as $450 billion annually because of organizational multitasking.

Everyone appears to be working very hard, but in fact, they are spending a lot of their time simply spinning their wheels, switching from task to task, without ever having the time to finish something before another ‘urgent’ item is put on their plate.

This shows just how toxic content switching can be.

How Context Switching Makes You Dumber

And if that wasn’t enough, some data even suggests that context switching can actually lower your IQ, at least temporarily.

Yikes. This is hitting hard.

According to cloud communication and collaboration platform Fuze, heavy multitasking knocks your IQ score down by as much as 15 points, which is three times more than smoking cannabis.

And I can definitely see why.

I know that I personally feel scatterbrained and disoriented when I’m bombarded with several tasks at once.

It hurts to think and it’s nearly impossible to concentrate.

Distractions Are an Epidemic

The problem is that we’re arguably more distracted than ever.

On one hand, the enormous number of digital tools, communication platforms, and an endless supply of informational resources are advantageous because they empower us to work efficiently and interact with customers and colleagues all over the world.

But on the other hand, they can be a major source of distraction.

For instance, studies have found that the average person checks their smartphone 150 times per day.

That alone can lead to constant task switching, quickly derailing any project.

And that’s just the tip of the iceberg.

As I said before, email, social media, instant messengers and collaboration platforms can also lead to context switching.

When you combine that with other workplace distractions — chatty coworkers, office noise and meetings are some of the most common — productivity can come to a grinding halt. 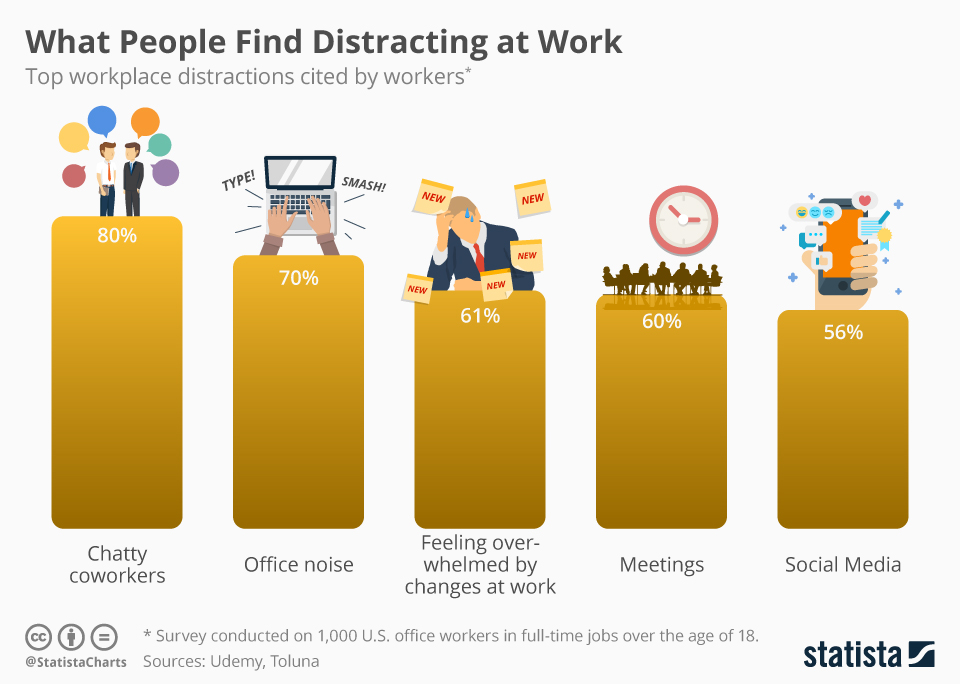 What’s really alarming is just how little time we spend before being distracted.

According to Fuze, we spend just a mere minute and 15 seconds on a task before being interrupted.

And it often takes more than 25 minutes to get back on track after being interrupted.

The bottom line is that context switching poses some major problems, and if you’re not careful, it can cripple your productivity and profitability.

How to Fight Context Switching

So, what exactly can you do to combat this problem? What specific steps can you take to avoid getting stuck in the habit of context switching?

Make a Conscious Choice to Change

The first step to correcting any problem is to first recognize there’s a problem.

After looking at the data up until this point, it’s clear that multitasking isn’t all it’s cracked up to be and can do more harm than good.

If multitasking is something you constantly find yourself doing, it’s time to make a conscious choice to change your behavior.

That in and of itself can help reduce the tendency to context switch and sets the stage for more self-discipline.

If for example, you’re a habitual email checker like me — the average person checks their email 15 times per day, or every 37 minutes — you might decide to reduce that number to just three times per day.

Once in the morning before you start, once at lunchtime and once at the end of the day when you’re wrapping up.

It’s all about identifying unsavory context switching habits and adjusting your behavior so that you can focus your attention completely on the task at hand.

Use a Task Management Tool

Once a habit becomes ingrained over years and years, it’s difficult to make a change, especially for those who struggle with self-discipline.

That’s why I recommend using a task management tool like KosmoTime to eliminate or at least minimize human context switching.

KosmoTime is designed to block distractions so that you can focus solely on each task, giving it 100% of your attention, before moving onto the next one.

Here’s an example of how it works.

When I first started this post in Google Docs, this popup automatically appeared from KosmoTime asking if I need to work on this.

I definitely did need to work on this, so I clicked on “Now: Start focus mode.”

And whenever I try to visit a different, unrelated website, such as Facebook, for example, this is what pops up. 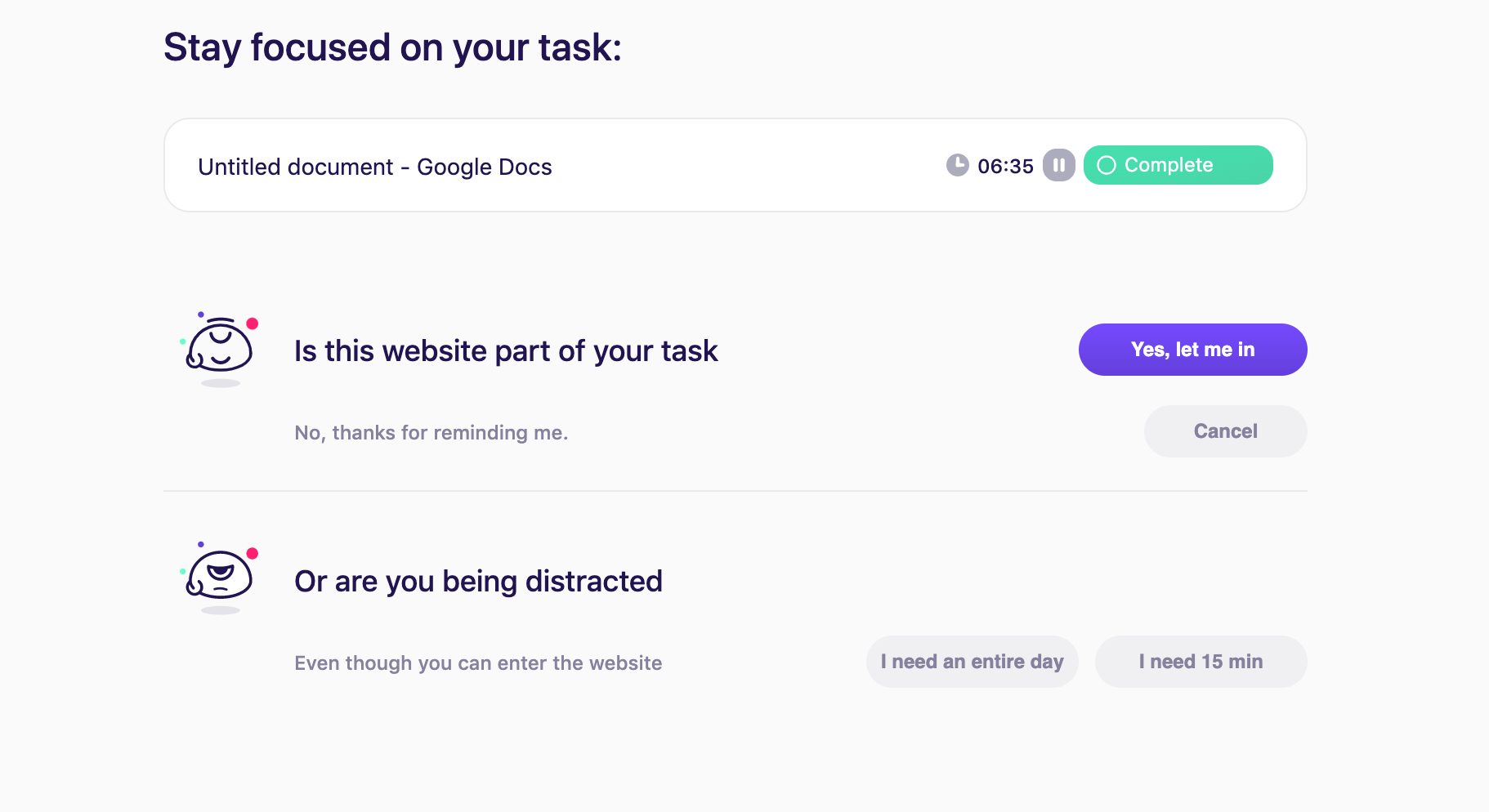 KosmoTime asks whether this website is part of my task, where I can click either, “Yes, let me in” or “Cancel.” 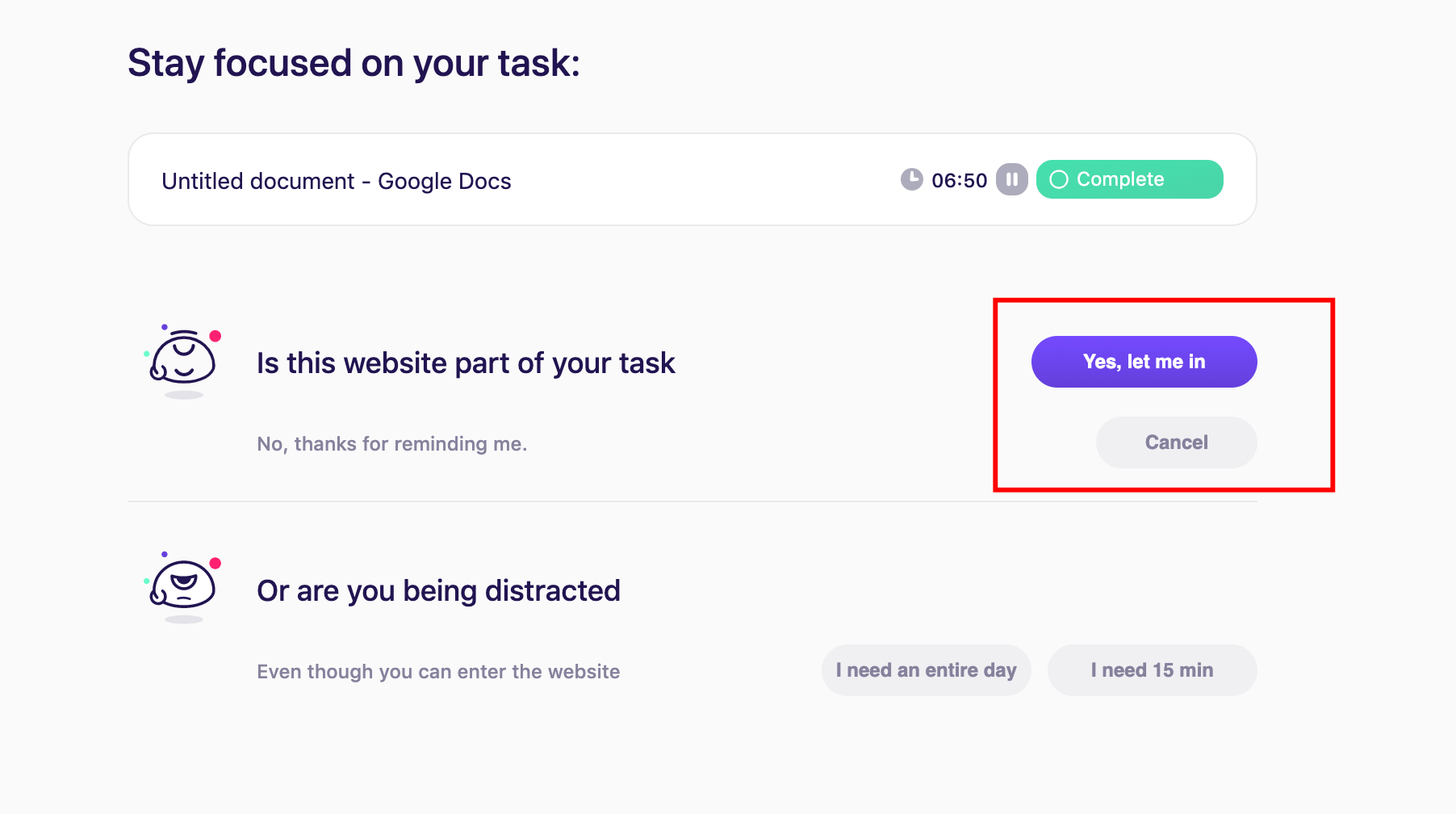 Or if it’s something that’s going to be a distraction, I can click on “I need an entire day” or “I need 15 min.” 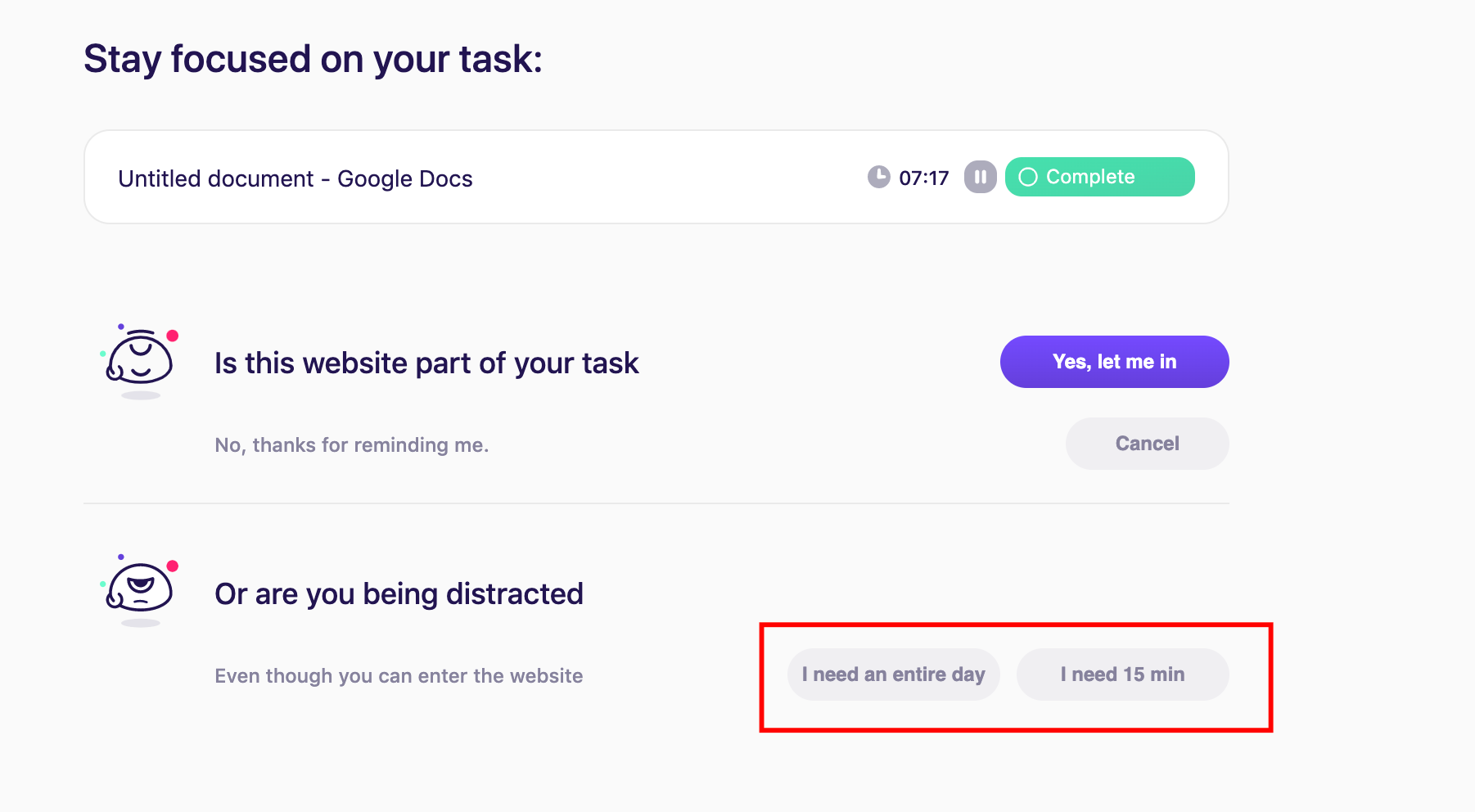 Given that Facebook is definitely not part of my task, I clicked on “I need 15 minutes,” and proceeded.

In turn, KosmoTime temporarily blocked it, allowing me to focus completely on writing this post and not get sidetracked by distractions.

Whenever I’m done, I simply go back to the task and click “Complete” so I can resume visiting whatever websites I want and am free to go down the social media rabbit hole if I so desire. (I do want to check on that breakup that’s going down.) 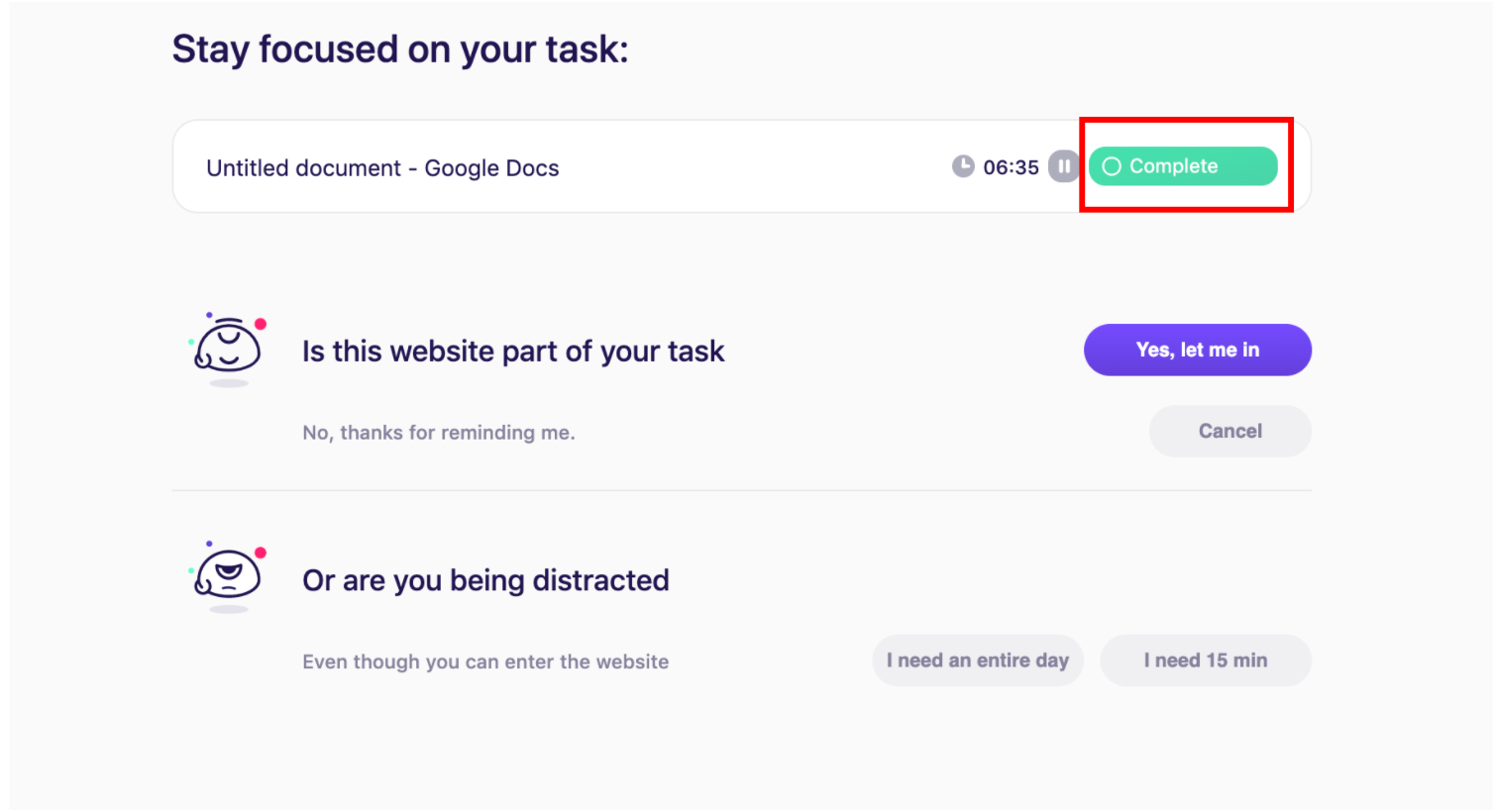 Using a task manager like this offers three key benefits.

It takes a little while, but over time you should see a dramatic drop in context switching, where you retrain your brain to single-task.

So if this is an issue you struggle with, using a task manager can be a real game-changer.

One of the most innovative leaders in the business world is Tim Ferriss.

He’s the host of the popular podcast, The Tim Ferriss Show, and the author of multiple breakout books, including The 4-Hour Workweek and Tools of Titans.

Over the years, he’s developed a huge list of business hacks and optimization techniques to be more efficient, with one of the best being task batching where you group similar tasks together and complete them all in one sitting.

Tim uses doing the laundry as an example.

You don’t place every piece of dirty clothing in the laundry and wash them one-by-one.

Instead, you wait for them to pile up and then wash all of your clothes at the same time.

If you need to respond to emails, for instance, you would use batching to tackle several emails in one sitting rather than constantly checking email throughout the day.

Not only does this help prevent context switching, it helps you get into a flow state where you perform at your best.

This can be huge because “98% of people focus best when facing a single type of task, instead of multiple tasks.”

For a full rundown on task batching, check out this video from Tim.

What is the “context” in context switching?

Context is a type of task.

So, context switching is where you rapidly move between different and unrelated tasks.

Why is context switching so expensive?

As cited above, up to $450 billion is lost annually because of content switching.

How do I get better at context switching?

Realize that context switching is not at all productive and avoid it.

Start by becoming more aware of this habit and recognize its detrimental impact on your work and life.

Develop the self-discipline to catch yourself trying to complete multiple tasks and choose instead to focus on one at a time.

How can we avoid context switching?

Historically, multitasking has often been encouraged because of the perceived boost in productivity it can create.

But as more data has been generated from reputable studies over the years, it’s clear that multitasking is more of a detriment than an asset.

Context switching is especially problematic because of the disruptions it creates and the negative impact it can have on productivity and profitability.

Knowing how to avoid context switching and retraining your brain to focus on one task at a time or similar tasks can result in a massive spike in productivity, while at the same time lowering stress levels.

Want to learn more about task management and block distractions? Try KosmoTime. It’s one of the only to do lists that uses scientific research to enhance your productivity.